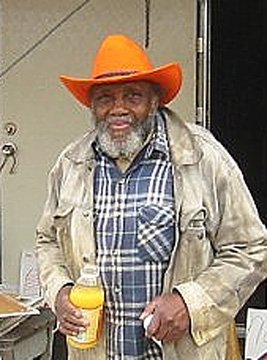 John Henry Toney was born on October 18, 1928 in rural Russell County, Alabama. He attended school through the seventh grade at the Sand Fort School near Seale, Alabama. His home is an old trailer house on ten acres of land bordered by a large swamp. When John Henry was working in the cotton mill thirty or forty years ago, he drew a picture of his boss. According to John Henry, the boss fired him because he did not like the picture. With that discouragement, he quit drawing. In 1994, while plowing a field he dug up a turnip that had a face on it so he drew it. “That face in that turnip was a sign to me, ” he says, “and I knew the Lord wanted me to draw again.” The honorary mayor of the town put the drawing into his wife’s antique shop, someone bought it and suddenly Toney’s career as an artist was born.

His trailer leans to one side and when he is outside the doors are kept shut by long poles propped against the doors. He has no running water and his only heat is a small electric heater. His bed is piled high with quilts. He paints sitting on his bed in cold weather and out under a shade tree in the summer.

John Henry is a deeply religious man and is known as “Mustache Jesus” by others in his community. He often depicts”Fancy Women” which he draws with big hair and emphasized breasts. Quite of his work, he is known to often comment, “I don’t mean to brag, but that picture is somewhere between genius and expert!” 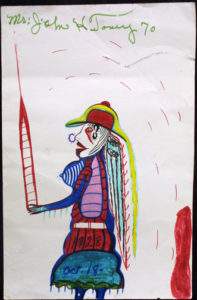