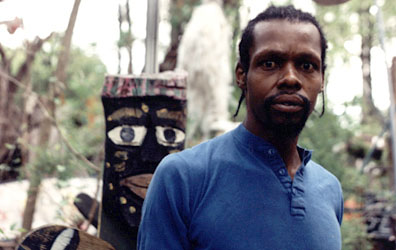 Lonnie Holley explains the story of his incredible art and life in this video:

Watch “SOMETHING TO TAKE MY PLACE The Art of Lonnie Holley” on Vimeo:https://vimeo.com/136211585?ref=em-share

Lonnie Holley was born the seventh of twenty-seven children in Birmingham, Alabama. He was moved around from foster home to foster home, until he ran away to Louisiana when he was fourteen. He drifted around the South working as a short-order cook in Louisiana, Florida and Alabama. Eventually Holley settled back in Birmingham.

When his sister’s two children died in a house fire in 1979, Holley became so depressed that he almost committed suicide. In the weeks that followed, he decided to do something constructive with his grief. As the family could not afford to buy tombstones for the children, he decided to make them himself.

“I asked God to give me something so that I may go to the top in life, and he did. I use the setting sun, the stars, the hills–all that has affected my imagination and what I put in my work.

The Tombstones were Holley’s first works of art. He soon began to create an environment of found materials that he assembled in his yard. Eventually he took some of his carvings to the director of the Birmingham Museum of Art. who was so impressed that he contacted the Smithsonian. This resulted in Holly’s work being included in the exhibition, “More Than Land and Sky: Art From Appalachia,” which originated in 1981 at the Museum of American Art in Washington. Holley’s work is in the permanent collection of the Birmingham Museum of Art after first being exhibited there in 1980.

For the first few years, Holley worked almost exclusively with industrial-made sandstone. He then began to work with other found materials such as discarded wire, scrap materials, and wooden objects. In what is considered a natural progression of his work, Holley eventually began to paint when materials and a place to paint became available.

In his conceptualization of human and animal forms and his strong emphasis on the spiritual world and his ancestral heritage, Holley gives us a glimpse of West African, Egyptian and Pre-Columbian influences. Yet his more abstract, geometric forms relate to the works of other Twentieth Century artists such as Arp, Lipchitzs, Moore, and Picasso.

Holley has emerged from the depths of personal despair to be regarded as a major national artistic force in our day. 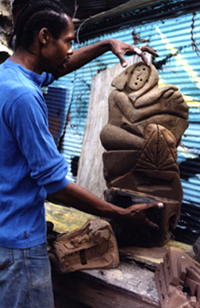 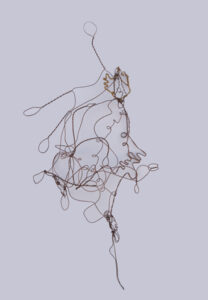 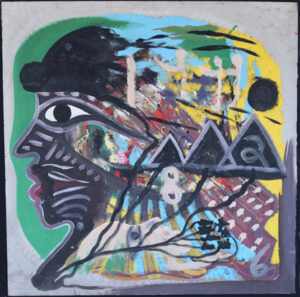