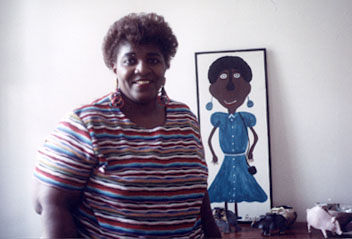 Annie Mural Tolliver was the daughter of artist, Mose Tolliver and Willie Mae Tolliver. She remembered as a child drawing animals with sticks in the dirt, and making clay houses and figures around their Sternfield Alley house. “This was one of my favorite ways to pass the time.” She attended school through the ninth grade, but dropped out to become a mother at age seventeen, and to marry artist L.W. Crawford. While rearing her three children there was little time to paint. Annie worked cleaning houses, hospitals, restaurants and motels.

“I was very interested in my daddy’s work. He would often show us how he painted things and encouraged all of us in the family to try painting also.”

Through years of being exposed to her father’s paintings, she and her brothers, Charles and Jimmy, took a greater interest in his work. “My paintings were sold as Mose T’s for about five years until the Fall of 1988. One day someone announced they would buy my paintings if I would put my name on them. With Mose’s permission I signed my work. When that happened, I decided to go on my own. At first I tried to paint just as Mose, then I wanted to paint what I liked and now that’s all I want to do.”

Annie’s work has been included in many important books and exhibitions including one organized by the American Women’s Museum in Washington, D.C., which toured various parts of the country.

She put her art career aside for several years to care of her father after his stroke and gradual blindness. After his death, she resumed painting full time in 2006. “My paintings are about what makes me smile–my children, my family and funny animals. I enjoy painting and now I know that I’ll never give it up. It’s in my blood.”

Annie battled multiple myeloma for a decade. Her cancer was in remission when she died after having complications from several surgeries during the last year of life. 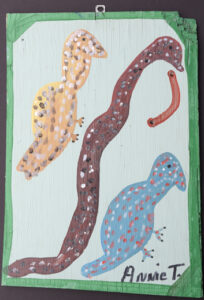 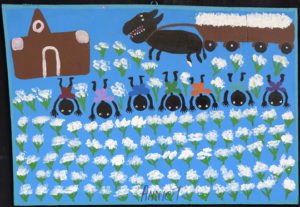 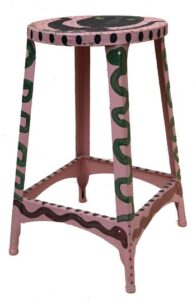