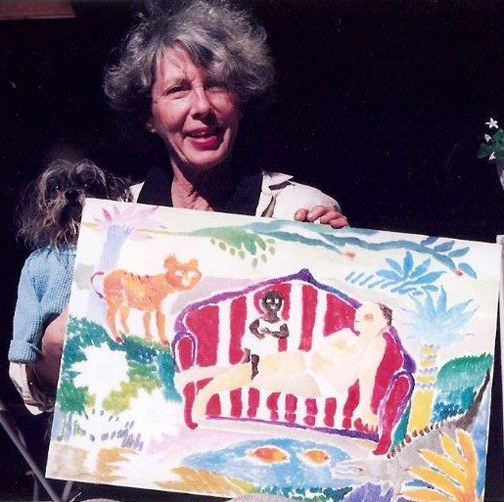 Known to many as the artist “Frantic,” Ann Roberts Morley began to draw at an early age and received encouragement from her family, especially from an uncle who was a portrait painter. She attended Florida State University but did not study art there. At the age of 20 she married Lt. Richard Morley, a Marine, and together they raised five children. The family moved often except when Richard was stationed overseas. This is when Ann and the children would return “home” to Pensacola. During these years “frantic” years, Ann painted images on whatever was at hand- wood, canvas and furniture. She also created glazed clay objects.  She signed her works, “Frantic.”

When Ann was widowed at age 48, she began to really “work” as an artist, showing her art in galleries. Over the next 25 years, she was prolific and created art constantly in various sizes and media.  She started each day early in her studio and worked diligently. Her art found its way to many collectors throughout the United States, Europe and the Middle East.

In the Spring of 2019, an exhibition of her work was presented by the Pensacola Museum of Art.