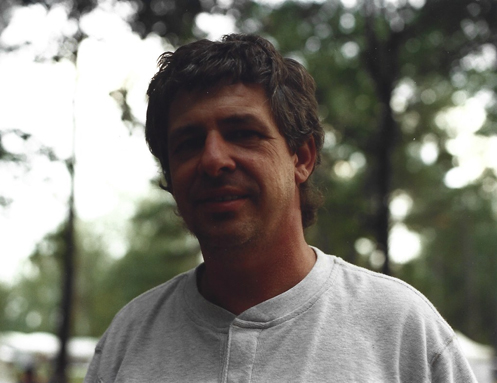 “I like for my paintings to have a calming effect on people; something that lights up their day,” Frank muses. Having been creative for most of his life, he first expressed himself musically playing in a rock band evenings while working in a Mississippi furniture company by day.

His rock band actually hit it big and had a recording/touring contract that tragically ended abruptly when the lead singer was hit and killed by a speeding truck. Frank returned to the furniture factory for work. A brief time later, an accident at the company caught his hands on fire which involved months of recovery. After several skin grafts, Frank spent time in physical therapy to regain use of his hands. Making art was one of the therapy sessions that Frank enjoyed most. “For some reason, it didn’t seem to hurt as much when I was concentrating on making something.”

The physical therapist encouraged him to keep his fingers busy even while at home in order to speed his recovery and to regain his agility. When he saw a set of watercolors on sale at WalMart one day, he took them home and became obsessed about painting. When friends came to visit, they began to notice his art work and often asked to buy one of Frank’s paintings. That was in 1991 and Frank has not stopped painting yet.

His preferred medium is gouache and ink. He has never returned to work at the furniture factory instead he began creating and selling his paintings, happily encouraged by his wife, Elaine. Now Frank’s work sells in galleries throughout the U.S. and he hopes never to return to factory work.

His ideas and imagery are drawn from the interior landscape of Frank’s mind which is filled with blue people and purple cats, baseball players and blues musicians, along with love boats and colorful villages. “I love children’s art for its innocence and purity. I try to capture that same magic in my work. And even my dog, Hoops, is a constant inspiration.” 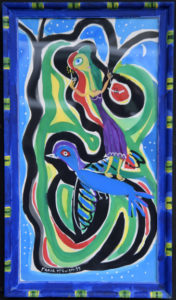 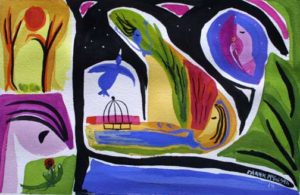 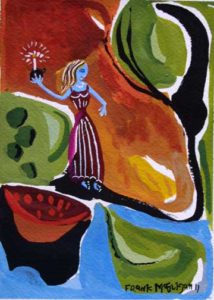 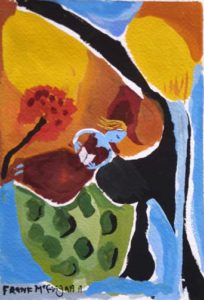 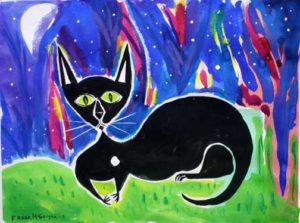 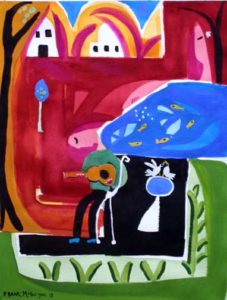 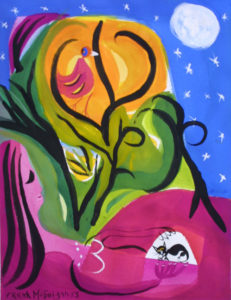