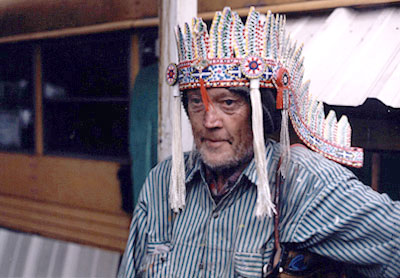 James Harold Jennings carved and painted wood since he was a young child, but for the last decade of his life, he worked at his art with a full time passion. Downhill from his boyhood home in rural North Carolina sat an environmental assemblage of brightly painted ferris wheels, whirligigs, rows of Indians, Amazon women, angels, turtles, birds, squirrels and imaginary creatures, all rattling in the wind. He said that his work was inspired by religion, but not the traditional type. Rather, his inspirations came from experiences with “astral projection and metempsychosis.”

Jennings lived alone from the late l980’s until his death in 1999 without electricity, telephone or running water. His “home” became his environmental assemblage highlighted by three derelict school buses. He slept and read in one. He cooked and ate in another and in the third, he created and stored his art. After dropping out of school in the fifth grade, he was home schooled by his mother, a former schoolteacher. For several years he worked as a projectionist at a drive-in theater, but following his mother’s death he received a small inheritance and supported himself by picking up bottles and cans along the roadside. That is until his art was “discovered by the big people – the museums come here now and want my work. People buy it as fast as I can make it.”

Jennings’ work was influenced by dreams, visions and his occasional reading material. One series of pieces featured “tufgh women” beating up frightened, smaller men and was inspired by reading about Celtic and Amazon women. When inspiration failed, Jennings resorted to a favorite trick. He pressed his fingers into his closed eyelids and sought ideas in the blotches of color which appear. Calling himself the “sun, moon and star artist,” he frequently incorporated these symbols of nature in his works and included them with his signature.

–Adapted from “Baking in the Sun” 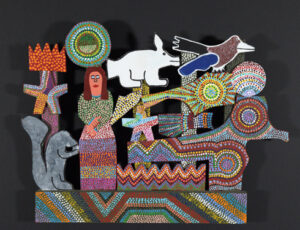 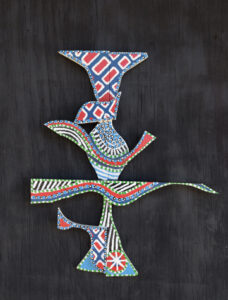 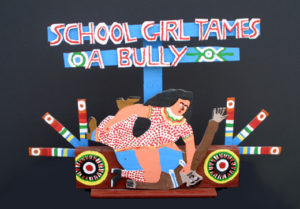 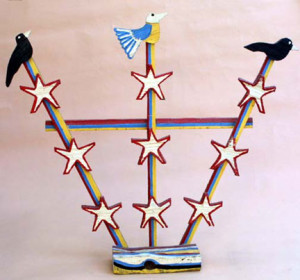 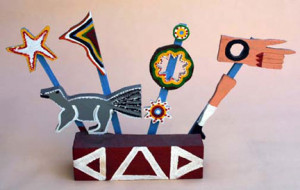