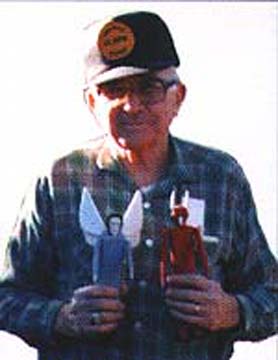 Fred Webster began carving around 1976 after retiring from being a schoolteacher and high school principal. He was born in 1911 in Fayette County, Alabama and lived there all of his life. After exploring numerous hobbies such as painting and ceramics, he settled on carving as his favorite activity. He had a severe loss of hearing and enjoyed staying busy with his hands. During his twenty years of creating folk art, he never swayed from his original intent to create for fun. He never rushed, thus his works are rare.

At first, Webster carved single horses, deer, chickens and human figures from wood that he gathered himself, mostly cedar wood with no knots. Then after several years, he began to carve straight grain basswood that he purchased. He also carved more complicated groups of figures and scenes depicting his favorite Bible stories such as Jacob’s Dream, Noah’s Ark, Adam and Eve and Jonah and the Whale. He was especially fond of creating fanciful scenes with choirs of angels, devils and of groups of people handling snakes, a religious custom from his rural area. These became his masterpieces. He also carved well-known figures from his area, Bear Bryant and George Wallace. He said his inspiration came from the things he saw, both in life and from photographs. In l996 Fred Webster stopped carving due to a decline in his health and loss of his sight.   He died in 1998. His carvings are in important collections and Museums throughout the Southeast. 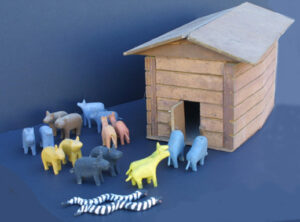 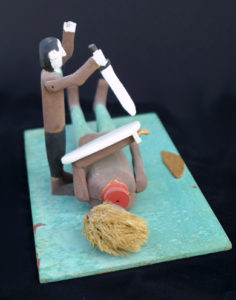