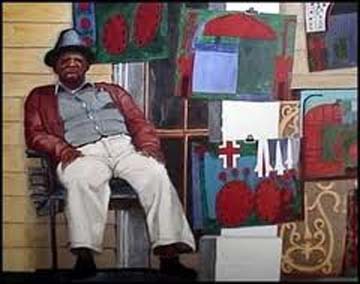 Willie White was born in 1910 to a farming couple in Natchez, Mississippi. He attended school through the third grade and, in 1929, left Natchez, to work on the “quarter boats” on the Mississippi River, repairing and securing the river levee. White moved to New Orleans and worked as a waiter for approximately twenty years. He later was employed as a janitor and as a sign painter the 1950’s and 1960’s.

He acquired an interest in painting after observing artists in the French Quarter in the early 1950’s. Using house paint, he at first imitated their work but quickly developed his own ideas and techniques. White decorated his porch and fences with his first art works. His early subjects were neighborhood churches and crosses.

White later gleaned images from television and his dreams, creating a personal visual vocabulary of dinosaurs, horses, fantastic birds, watermelons, skyscrapers, rocket ships, and planets. In the early 1960’s he began to work almost exclusively with felt markers and white poster board and used canvas only when it was provided. Willie White died in 2001 after spending the last years of his life in a nursing home in New Orleans. His works are in the collection of the Ogden Museum of Southern Art, the New Orleans Museum of Art, and the Birmingham Museum of Art and are included in many distinguished private collections.

The painting above of Willie White was painted by Gene Rogas. 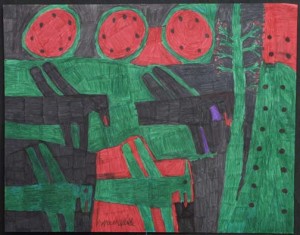