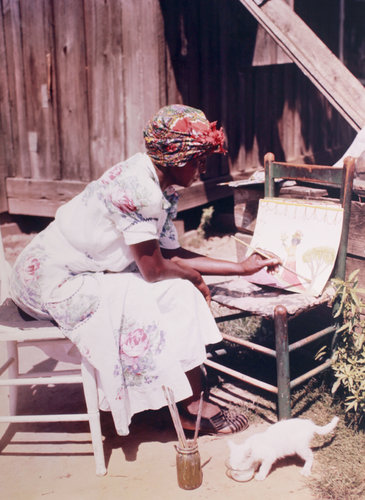 Clementine Hunter was the quintessential contemporary folk artist born in the Cane River region of Louisiana in 1887. She was born on a plantation said to be the inspiration for Uncle Tom’s Cabin. She worked as a farm hand; never learning to read or write. When in her fifties, she began painting, using brushes and paints left by an artist who visited Melrose Plantation, where she lived and worked. Hunter’s artwork depicted plantation life in the early 20th century, documenting a bygone era. She first sold her paintings for as little as 25 cents. By the end of her life, her work was being exhibited in museums and sold for thousands of dollars. Hunter was granted an honorary Doctor of Fine Arts degree by Northwestern State University of Louisiana in 1986.

Hunter was the granddaughter of a slave, born just two decades after the American Civil War. She was born either in late December 1886 or early January 1887, the eldest of seven children to Creole parents at Hidden Hill Plantation, near Cloutierville in Natchitoches Parish, Louisiana.

Known as a harsh place to live and work. Hunter’s given name was originally Clemence, but she changed it after moving to Melrose Plantation when she was 15. She spent much of her life picking cotton and only attended school for 10 days, never learning to read or write.

Clementine married Emmanuel Hunter, a woodchopper at Melrose, in 1924. The two lived and worked at Melrose Plantation for many years. Hunter worked as a field hand in her early years and as a cook and housekeeper beginning in the late 1920s. Hunter bore seven children, two stillborn. On the morning before giving birth to one of her children, she picked 78 pounds of cotton, went home and called for the midwife and was back picking cotton a few days later. Hunter lived her entire life in rural, northwest Louisiana, never going more than 100 miles from home.

Melrose Plantation was a mecca for the arts under the guidance of its owner, Cammie Henry. Numerous artists and writers visited there. Brushes and discarded tubes of paint left by New Orleans artist Alberta Kinsey after a 1939 visit to Melrose Plantation, were used by Hunter to “mark a picture” on a window shade, beginning her career as a self-taught artist.

Hunter gained support from numerous individuals associated with Melrose Plantation, including François Mignon, plantation curator who supplied her with paint and materials, and promoted her art widely along with James Register. With Mignon’s help, Hunter’s paintings were displayed in the local drugstore, where they were sold for one dollar in her later years.

Hunter eventually became one of the most well-known self-taught artists, often referred to as the black Grandma Moses. Painting from memory, she is credited as an important social and cultural historian for her documentation of plantation life in the early 20th century, including picking cotton, picking pecans, washing clothes, baptisms, and funerals. Many of her paintings were similar, but each one is unique. Hunter was noted for painting on anything, particularly discarded items such as window shades, jugs, bottles, and gourds and cardboard boxes.

An article appeared on Hunter in Look magazine in June 1953, giving her national exposure. In the article, Robert Bishop, first director of the Museum of American Folk Art in New York called Hunter “the most celebrated of all Southern contemporary painters.”

She was the first African-American artist to have a solo exhibition at the Delgado Museum (now the New Orleans Museum of Art) and achieved a significant amount of success during her lifetime, including an invitations to the White House from U.S. Presidents Jimmy Carter and Ronald Reagan.   Her works are included in numerous Museums worldwide including The Smithsonian. She died in 1988, still living in the Cane River area of Louisiana.